Will a fifth attempt to strengthen animal cruelty laws come to an end next week? 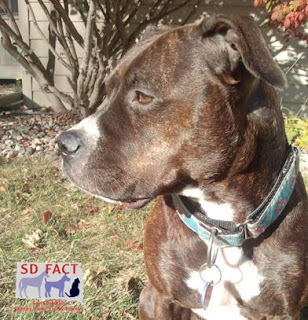 North Dakotans recently introduced a comprehensive animal cruelty bill to provide felony level penalties for the worst acts of cruelty and reform their animal cruelty code. SB 2211 will be heard ND’s Senate Ag Committee on January 24. The bill has overwhelming support from Ag entities and animal advocates alike. We congratulate North Dakotans for recognizing the link between animal cruelty & human violence, and applaud their efforts to pass meaningful legislation for animals in 2013.
If the ND bill passes, South Dakota will become the only state in the country without felony level penalties for the most egregious acts of animal cruelty. It will be a sad day in South Dakota when our fifth attempt at improving SD animal cruelty laws comes to an end. But don’t beat yourselves up and don’t blame the South Dakota Legislature – Ag interests dictate the legislative agenda in Pierre, so unless they are willing to come to the table we may never see laws improve for animals.
The effort to strengthen SD animal cruelty laws started in 2008 when then forty-three states had enacted felony penalties for certain acts of animal cruelty – acknowledging the proven link to human violence. Animal advocates from across South Dakota began working together to introduce a bill in 2009.  HB 1146 prohibited the torture of animals and provided felony level penalties for the worst acts of cruelty. The bill was sponsored by Representatives Cutler, Krebs, Novstrup (David), Rausch, and Schrempp and Senators Abdallah, Dempster, Gillespie, and Gray. However when the bill was presented to the House Judiciary Committee, Ag lobbyists said the bill was too far reaching and could negatively impact animal agriculture; the bill died in committee.
In 2010, South Dakota advocates again tried to introduce a bill addressing the torture of animals but no sponsor was secured. In an effort to ward off a third attempt at strengthening SD animal cruelty laws, Ag entities formed the Animal Care Law Review group. The group was spearheaded by the South Dakota Pork Producers, SD Association of Cooperatives, SD Cattlemen’s Association, and South Dakota Farm Bureau. They invited the SD state vet, several members of the South Dakota Animal Control Association, several dog breeders and a SD humane society director to participate. Their report claimed they spent the summer gathering input from group members on South Dakota’s laws dealing with animal care and humane treatment. However in speaking with participants they met only twice and the moderator led group members to conclude no statutory changes are needed stating “South Dakota has a proud and rich history of animal ownership and husbandry.”

At the start of the eighty-sixth legislative session, the handout below was distributed to members of the House and Senate Ag committees. Lobbyists with the SD Association of Cooperatives, SD Cattlemen’s Association, South Dakota Farm Bureau and South Dakota Pork Producers presented the Animal Care Law Review group findings at committee meetings in January 2011. They reported SD’s existing animal laws are sufficient; the process for reporting and responding to cruelty complaints is solid; and only out-of-state radical anti-agriculture groups think South Dakota animal cruelty laws should change. That year, dozens of South Dakota animal advocates again contacted their legislators asking for the introduction of a bill addressing the torture of companion animals, but Ag lobbyists successfully blocked this effort citing the findings of their Animal Care Law Review group.

In 2012 South Dakota animal advocates tried again; seeking protection for pets. In a forth attempt to introduce a bill, they presented legislators with a draft so specific it would make only the torture of cats and dogs a felony in South Dakota. Was this still too far reaching? Apparently so because Ag lobbyists went one step further and convinced legislators to introduce HCR 1006. This resolution, drafted by the South Dakota Farmers Union, was in opposition to certain actions by animal rights groups and it was sponsored by Representatives Fargen, Brunner, Conzet, Cronin, Dennert, Feickert, Gibson, Greenfield, Hawley, Hoffman, Hunhoff (Bernie), Iron Cloud III, Jones, Killer, Kirschman, Kloucek, Kopp, Lucas, Lust, Nelson (Stace), Olson (Betty), Rausch, Russell, Schaefer, Schrempp, Sigdestad, Street, Turbiville, Vanneman, Verchio, White, Wink, and Wismer and Senators Krebs, Begalka, Bradford, Brown, Frerichs, Gray, Hansen (Tom), Hundstad, Juhnke, Lederman, Maher, Nelson (Tom), Olson (Russell), Rampelberg, Rave, Rhoden, Schlekeway, Sutton, and Vehle. This resolution passed unanimously to support SD’s number one industry, agriculture – and legislators were not even willing to discuss a bill with their own constituents in the fear of being associated with radical anti-agriculture animal rights activists.
At the conclusion of the eighty-seventh legislative session, South Dakota animal advocates began discussing a bill that would protect companion animals and SD communities from violent offenders. It was specifically drafted to exempt traditional Ag practices in the hope this would appease members of Ag opposition. An all-volunteer grassroots group of South Dakotans began contacting their elected officials and district candidates about a felony companion animal cruelty bill prior to the November 2012 elections. In December support of legislators was secured but no prime sponsor identified.
This brings us to today – the bill introduction deadline for South Dakota’s eighty-eighth legislative session is just days away and we’ll keep trying to secure a prime sponsor. In the end South Dakota animal advocates may not succeed and our fifth attempt to pass a law forty-eight other states saw fit to pass years ago, may fail. We’ve done everything we can – we spoke up and we provided the facts.  Constituents in almost every legislative district contacted their leaders and we asked SD Ag organizations for their support but received no response.
The truth is Ag entities are using misinformation and fear tactics to influence legislators – our elected officials, the very individuals we selected to represent us. So we can thank Ag United, Midwest Dairy Association, South Dakota Soybean Research & Promotion Council, South Dakota Poultry Industries Association, South Dakota Corn Utilization Council, South Dakota Corn Growers Association, South Dakota Beef Industry Council, South Dakota Soybean Association, South Dakota Farm Bureau, South Dakota Pork Producers Council, South Dakota Cattlemen's Association, South Dakota Dairy Producers, South Dakota Associations of Cooperatives and the South Dakota Farmers Union for the fact South Dakota pets still have no protection in 2013.
If you are a member of any of these groups call and ask them to champion this bill that excludes traditional Ag practices and protects companion animals. But if you aren’t a member – ask yourself why legislators place more emphasis on the wishes of 18% of our state’s population (those these Ag groups represent), than they do on the wishes of other South Dakotans. There is no reason South Dakota should be the only state in the country where it is okay for an individual to violently kick a Chihuahua until it’s unconscious and seizing; to beat a pet cat to death with a hammer; to bludgeon a prized hunting dog in its kennel; or to cut the ears off a puppy with a steak knife and receive a sentence that amounts to that of speeding ticket. These acts are violent. They need to be treated like real crimes. Malicious and intentional animal cruelty should be a felony, it is just that simple.
Posted by SD FACT at 11:27 PM 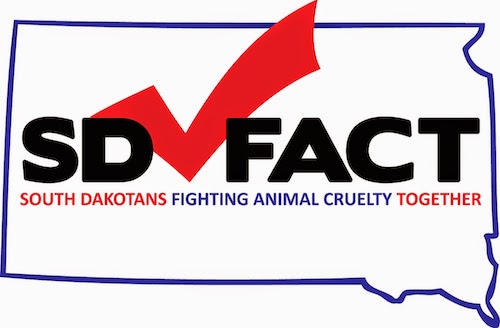